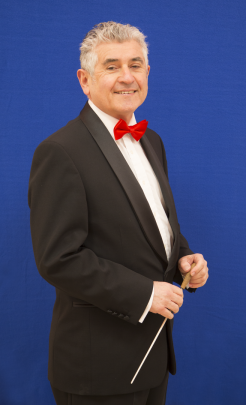 Ian Studied music at the Cambridge College of Arts & Technology in the 1970‘s.

He moved to Bristol in 1974 to join the Stanshawe Band, which later became the Sun Life Band (SLB).

Ian spent 20 very successful years with SLB, initially as Assistant Principal Cornet and then on Flugel Horn.  Apart from traveling much of Europe and performing regularly for the BBC and recording many records and CDs, the band had many competition successes, including the runners up awards at both National & British Open Championships, culminating in gaining the Open Champions title in 1990, followed by The World Music Festival title in Kerkrade in 1992.

Ian has been conducting bands for many years, enjoying a very successful spell with Portishead Town Band prior to joining us at Wotton in 2012.

Wotton Band has flourished under Ian's direction, which is evident not only from our contesting successes, but also from the quality of concert music we are now able to perform!