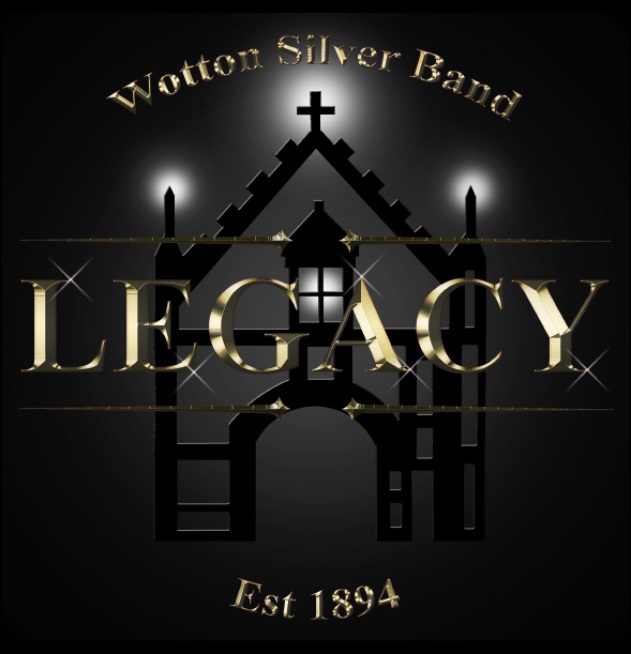 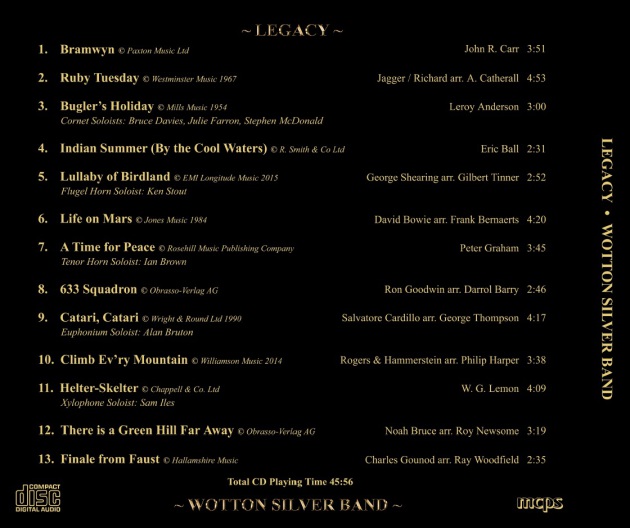 Legacy reflects the band’s journey through its 122-year history and it is dedicated to all members past and present who, together with the many supporters, have worked hard to maintain a brass band to serve the town of Wotton-under-Edge and its surrounding district.

Formed in 1894, the band started life as The Abbey Band, named after the abbey in the nearby village of Kingswood where they rehearsed for the first 20 years.  The band’s founder was William Henry Armitage, General Manager of Tubbs Lewis & Co. which amongst other things was famous for its ‘Porcupine Brand’ hair pins.

The earliest surviving photographs of the band date back to a time when clarinets were used in addition to brass instruments – this was around the time that Charles Gounod composed the opera ‘Faust’ which is featured on this CD.

By 1899 the band had reverted to the use of brass instruments only.  This was just after brass bands began competing in the now world-famous ‘Whit Friday Marches’ (a competition in Yorkshire dating back to 1884 where brass bands compete against each other by playing a march).  The band recently travelled north to take part in this unique competition, playing John Carr’s march ‘Bramwyn’.

Unfortunately, due to the outbreak of the first world-war, by 1915 the membership was severely depleted and the band became virtually inoperable with 12 band members on active service.  Towards the end of the war, the band was reduced to less than eight ‘caretaker’ members but in 1919, after five difficult years, a decision was made to ‘resume banding properly’.

The band became busy and successful with good local support, leading to talk of a bandstand being built in the town, given that the band was attracting crowds in excess of 200 people when they played in the town.  However, these good times were not to last for long.

Although around 70% of the band members were too old to serve during the second world-war, many were involved in essential war work at home which, coupled with the untimely deaths of several members, meant that by 1943 the band was struggling with fewer than 15 members.

From the end of WW2 and throughout the 1950s the band continued to struggle.  Several meetings were held to discuss whether or not it should continue and local appeals were made to encourage membership.  Despite these efforts, in 1952 the band that led the Kingswood Carnival was made up of just eight members, which for the first time included two women.

Even so, the band continued to perform publicly and from 1910 to this day it pays its annual visit to the top of Wotton Hill to play hymns and marches to welcome in the spring.  The hymn, ‘There is a Green Hill’, marks the fondness that the band holds for the tradition of playing there each year.

Bad as times were for the band in the 1950s, things got even worse when in the early 1960s only two members remained and agreed to meet weekly for a chat and to have a blow ‘to keep the spirit of the band alive’.  Somehow by 1966 they had managed to persuade five others to join them and from there it grew, with 14 members by the end of 1967.

The world was changing.  John Lennon and Paul McCartney were busy with their Yellow Submarines, Herb Alpert and the Tijuana Brass hit the top of the Billboard's Pop Album Chart, whilst Mick Jagger and Keith Richards released ‘Ruby Tuesday’ with The Rolling Stones.  For the brass band movement the 1960s was an important period, with the composition of many works by Bristol’s own brass band composer, Eric Ball, including ‘By the Cool Waters’ which is taken from the popular test piece ‘Indian Summer’ which is still played regularly by bands today.

In 1969 the band became Wotton-under-Edge & District Silver Band, having moved its base from Kingswood to Wotton over 40 years earlier.  The band grew during the 1970s, with many learners in the band.  To this day, the band continues to offer free tuition to all who want to learn via its training band and many of the training and junior band members eventually join the senior band – and so the process goes on.  This CD features one talented young member of the band: listen to Sam Iles’ performance of ‘Helter Skelter’ on the xylophone and you will appreciate that talent is out there just waiting to be harnessed.

During the 1980s the band continued to build on its success and distinguished itself on a number of occasions in the field of contesting.  By 1989 the band were West of England Fourth Section Champions and gained promotion to the Third Section, where it remained, with two brief promotions to the Second Section in the late 1990s and the mid-2000s.

To reflect this period we have included items that are the type of music featured in typical Wotton Band concerts of those times: ‘Buglers Holiday’ features a cornet trio requiring technical ability and dexterity, ‘633 Squadron’ from the film of the same name, ‘Climb Every Mountain’ from the Rogers & Hammerstein musical ‘The Sound of Music’, and ‘Ruby Tuesday’ from the pen of the Rolling Stones.

In March 2013 the band became West of England Third Section Champions and gained promotion to the Second Section, and just two years later, after fifth place in 2014 and second place in 2015, it was promoted to the First Section.  Without doubt this was the greatest achievement in contesting in the band’s 122 years.

The current band is extremely proud of the position we are in today and extremely grateful to the past members whose dedication and persistence assured the band’s survival and growth.  The band continues to work towards its objective, ‘to make music for the pleasure of its players, and the general public and to encourage recruitment and teaching of musicians, particularly young people, so that a brass band is maintained as an amenity to the town and district of Wotton-Under-Edge for posterity’ – Our Legacy.

Legacy would not have been possible without the support of the local community and the hard work of the players and supporters of the band.

Special thanks go to…

We are also grateful to for the help provided by …