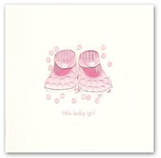 Congratulations to our 1st Trombone player, Dave McWhirter and his wife Kirsty on the arrival of Erin Niamh on December 19th - a little sister for Leo, & a first grandaughter for Alan (Bb Bass) & Jenny (2nd Horn)!

Congratulations also go to Pete Stanulewicz (Euphonium) and his family on the arrival of his fourth grandaughter Teddy on December 13th.

The future of the band is in safe hands!

As always, December was an extremely busy month, beginning with our annual Christmas Concert at Kingswood Village Hall on Saturday 5th.  Our programme was packed with Christmas music including a beautiful performance of 'In the Bleak Midwinter' from solo horn player Ian Brown, and the fun flugel & trombone duet 'Baby it's Cold Outside' from Ken Stout and Dave McWhirter.

On Wednesday 9th, we shared the stage with Yate Choral Society in a fundraising concert for Chipping Sodbury Lions at Chipping Sodubry Town Hall, and after that .... the carolling began in earnest!

Over the three weeks leading up to Christmas, small groups of us played in supermarkets and high streets throughout the area in a massive fundraising effort.  As always thanks go out to all the band for a great effort, to our army of brilliant collectors and also to the public of Wotton & surrounding areas for their generosity. 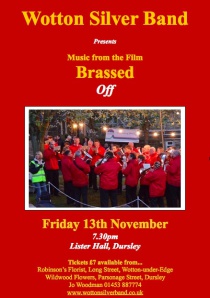 Our 'Brassed Off' concert took place on Friday 13th November at Lister Hall in Dursley.  The audience was treated to fantastic performances from our soloists, (Bruce Davies (Cornet), Alan Bruton (Euphonium) and Ken Stout (Flugel Horn)) along with a great selection of music from the film including 'Death or Glory', 'Danny Boy' and 'William Tell'.

The band was delighted to welcome Kevin Robbins, our guest MD for the night.  Thank you Kevin!

On Sunday 8th the band was busy in our local towns, playing at the morning parade in Wotton-under-Edge and in the afternoon at Dursley.  It was great to see so much local support for the Royal British Legion on this important day.

On Friday 23rd the pand played at the Wotton Poppy Concert.  Our programme included a wonderful performance of 'Concerto De Aranjueiz' from Ken Stout on Flugel Horn, along with the haunting 'Sunset' from Bruce Davies and Charlie Poole.

The concert was rounded off with the traditional Last Night of the Proms favourites. 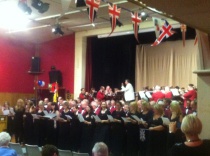 On Saturday 17th the band took part in the annual Poppy Proms Concert - playing to a packed Lister Hall, Dursley.  This was a joint concert with the Panache Steel Band from Thornbury and the Dursley Male Voice Choir.

Back by popular request was 'Post Horn Gallop' from Bruce Davies, and the concert was rounded off with the Last Night of the Proms classics.

5th Place at the Nationals

Our hard work paid off on Saturday 19th when the band was awarded 5th place in the 2nd section at the National Brass Band Finals in Cheltenham.

The band played really well, with wonderful performances from our fantastic soloists and a great team effort.

The best result in 120 years of Wotton Band!! 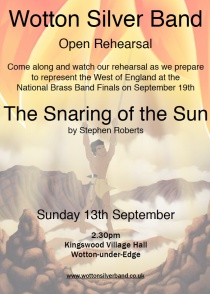 Following our success in the West of England Championships 2nd Section in March, the band is now busy preparing to represent the area at the National Brass Band Championships in Cheltenham on 19th September.

This year's test piece is 'The Snaring of the Sun' by Stephen Roberts...

Inspired by Polynesian folklore, ‘The Snaring of the Sun’ tells of the Maori legend of demi-god Maui, who used his magic powers to capture the sun and stop it from crossing the sky too fast.

After trekking to the crater in which the sun slept and ensnaring its beams with magical ropes, Maui persuades the sun to agree to travel more slowly, especially in summer, so mankind can enjoy the benefits of its rays.

It was originally written in 2015 for the National Youth Band of New Zealand and is series of highly descriptive scenes which outline the story from the opening descending sunrise through to the trek to the volcano, the capture of the sun’s rays and the final triumphant arc of its new radiance.

The next few weeks will be a busy time for us as we make our final preparations, and as part of this we will be holding an Open Rehearsal at Kingswood Village Hall at 2.30pm on Sunday 13th September where we hope to see lots of our friends and supporters.

On Saturday 15th the band played at Keynsham Memorial Park.  This was a first for the band but we were made to feel extremely welcome and hope that we will be invited back to play at this great venue again!

Sadly, this is the last concert in our 2015 Summer Programme, but we have plenty to keep us busy during the Autumn.  (See all Engagements)﻿﻿ 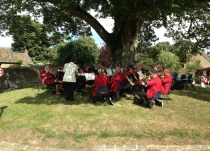 On Saturday 1st the band returned to the lovely Cotswold village of Cold Aston to perform at their annual Summer Fayre.  As always, the band received a very warm welcome (along with some very good cakes!)  Thanks to the organisers for a great event & also for arranging better weather than last year! 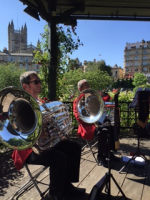 On Sunday 19th the band performed in the bandstand at Bath Parade Gardens.  The sunshine attracted a large and appreciative audience who were treated to a programme that included solos and features from Bruce Davies (cornet), Jim Mason (soprano cornet), Alan Bruton (Euphonium) and Ken Stout (Flugel Horn).

As usual, the band's performance at the Church Fete on Saturday 11th was upstaged by the fantastic Training Band.  (Lots of pictures of their fantastic performance - with a few familiar faces helping - below).  Well done everyone!

On a sunny Saturday 4th the band took part in the busy Thornbury Carnival.  This year's event had an American theme and our programme included Sousa's 'Liberty Bell', a Frank Sinatra Selection 'Ol' Blue Eyes', and 'An American Trilogy' arranged by Goff Richards. 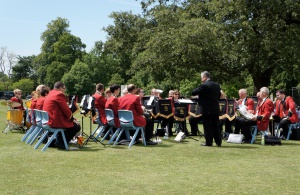 On Sunday 21st the band played at Prior Park College Fete.  The college is in a stunning setting overlooking the city of Bath and as we played, a cricket match was taking place on the field behind us - a perfect English Sunday afternoon setting (only spoiled by a rather chilly, strong wind!)

On the evening of Sunday 14th, the band played at the Stinchcombe Proms.  The event is organised by the Dursley Rotary Club to raise funds for a wide range of local charities.

As usual, the concert was expertly hosted by Terry Pasco and included all the usual 'Last Night of the Proms' favourites.  Also back by popular request was Bruce Davies playing 'Post Horn Gallop' (pictured). 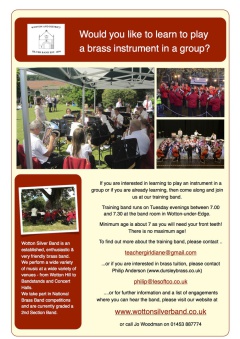 On Saturday 16th, the Training Band played at the Blue Coat School Fete in Wotton.  As usual, the band put on a great performance with a varied selection of music including 'Mardi Gras', 'Pastime with Good Company', music from The Beatles and a selection of film music.

The Training Band were joined by a quintet from the main band who played two programmes of music throughout the afternoon, while band members offered children (and adults) attending the Fete an opportunity to try playing a brass instrument in a fun competition to see who could blow the loudest note!

The band made a start to its programme of summer fetes and concerts with its annual trip to Tytherington Village May Day Fete.

The band are proud to have witnessed the highlight of the afternoon when Mrs Joyce Vizard received her British Empire Medal from the Lord Lieutenant of South Gloucestershire.  Mrs Vizard has been honoured by the Queen for her services to the community, helping to set up and working in the Tytherington village community shop for almost 17 years.  The band played 'Congratulations' and 'Miller Magic' (a request from Mrs Vizard). 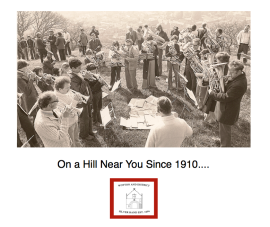 On Sunday 3rd the band made its annual trip to the top of Wotton Hill to play a selection of hymns and marches to welcome in the Summer (a band tradition since 1910).  Thanks again go to our good friend Gordon Phillips for conducting the band and also to the many people who made the climb to watch our performance!

On Sunday 26th the band headed to Ross on Wye to support the local Gloucestershire Brass Band Association's Entertainment Competition.

Unfortunately, the adjudicator on the day did not enjoy our choice of programme quite as much as the audience at Wotton Church, although we did come away with a prize for 2nd place in the 2nd Section. 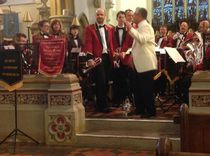 On Saturday 25th the band performed a joint concert with Round the Edge Community Choir and poet, Rosie Bailey as part of the town's Arts Festival.

The band's performance included a programme of music prepared for the GBBA Entertainment Contest.  This featured 'Post Horn Gallop' from soloist Bruce Davies, duet 'All I Ask of You' from Jim Mason (Soprano Cornet) and Alan Bruton (Euphonium), the lively 'Tiger Rag', 'Vitae Lux' featuring Ken Stout (Flugel Horn), and finale from 'The Firebird'.

Band, Choir and Poet were extremely well received by a very appreciative audience.

All our hard work paid off when on Saturday 14th we were awarded 2nd place in the West of England Brass Band Championships.  The band will now go on to represent the South West in the National Championships in September along with this year's winners - AW Parker (Drybrook).

This was the band's second appearance in the 2nd Section since our promotion from the 3rd Section in 2013.  The result will promote us to the 1st Section in 2016, which is  a first in the band's 120 year history!

Congratulations and thanks go to all the band members and to Ian Dickinson for his excellent musical direction.

We are heading off to Torquay on Friday 13th to play in the Second Section of the West of England Brass Band Championships on Saturday 14th.  Thanks to all of our friends and supporters for their good luck messages!

(The picture shows us during our winning performance in the Third Section in 2013). 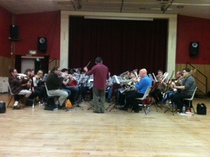 On Sunday 8th, we held an Open Rehearsal at Lister Hall in Dursley where our friends and supporters were welcomed along to hear how we were progressing with this year's area Test Piece.  This was a great opportunity for us to rehearse the piece in a different environment and in front of an audience.  A big thanks to all of you who turned out on a rainy Sunday morning to support us!

Preparations are now well underway for the West of England Championships in March.  This year's test piece is 'Variations on Maccabeus' by Kevin Norbury which was written in 1995 and is based on the well-known theme 'See, the Conquering Hero Comes' from Handel's oratorio, 'Judas Maccabeus'.

This will be the band's second appearance in the 2nd Section Area Championships since promotion from the 3rd Section in 2013 and following our 5th place last year, we are hoping for a good result.

We will be holding an Open Rehearsal at Lister Hall, Dursley on Sunday 8th March from 10.30am where you can come along to hear how we are progressing.

On the evening of Saturday 7th, the band played for the Downend 41 Club at their Ladies Night.  The band played a selection of 'light' music during the dinner and ended the evening with lively performances of Jerusalem, Land of Hope & Glory, Rule Britannia and The Dam Busters.  We were made to feel extremely welcome by a very enthusiastic audience and thoroughly enjoyed the evening.  Special congratulations go to Bruce and Ian for great solos!