On Saturday 29th May, our entry into the Online Whit Friday March Championships, organised by Foden's Band was aired.  The band was placed a very respectable 47th out of the 119 bands who entered, which included a large number of Championship Section Bands and bans from overseas.  The band chose to play the march 'The New Colonial' by RB Hall, and our video features many young helpers from our band family.

On Saturday 20th March our contest entry was aired for the first time as part of the Kapitol Cory Online Brass Band Championships 2021.  Our 10 minute programme is a celebration of our home county of Gloucestershire.  The contest results were announced on Sunday 28th March and the band were delighted to be awarded a very respectable 8th place along with the prize for the best trombone section!

We start our programme with a tribute to Gustav Holst, one of Gloucestershire’s most famous musical sons. Holst was born and raised in Cheltenham, and throughout his life never lost his love for the county of his birth. We will play the stirring March from his 1st Suite in Eb, originally composed for Military Band, but played here in the arrangement for Brass Band by Sydney Herbert.

For our second piece we will play ‘As the Deer’ arranged by Philip Wilby. It is a modern Christian worship song drawing on texts from the Bible. We offer it here as a tribute to William Tyndale, a local Gloucestershire man, who was the first person to translate the New Testament into the English language. The band are joined in this performance by Gloucestershire-born soprano Mary-Jess - the voice of Downton Abbey and the winner of the Chinese X Factor.

Our programme ends with Alan Fernie’s arrangement of "I Wish I Knew How It Would Feel to Be Free". Our principal cornet Bruce Davies features in this jazz song written by Billy Taylor and Dick Dallas, and known by many from a widely played version recorded by Nina Simone. After a year or more of lockdown, we are all looking forward to being free, and for the video we asked the band to show some of the things they are looking forward to being free to do – including of course, the Gloucestershire sport of Cheese Rolling!

I Wish I Knew How it Would Feel to be Free

On Saturday 26th, the results of the Cory Online Brass Band Championships were announced. The band was awarded 4th place overall in the Second Section of this international competition, and won prizes for the Best Welsh Piece (Calon Lan), Best Cornet Section and Best Baritone and Euphonium Section.

The Essence of Brass

The tradition that started in 1910 for the band to play a free concert to the public on ‘Wotton Hill’ continued in this unusual year, albeit in a modern way.  The event is a highlight of the calendar for us and traditionally heralds the start of our summer outdoor concert season, when we hike up the hill on the edge of the town, with its fantastic views of the countryside, to play a selection of marches and hymns.

This year, due to the global pandemic, the band is not permitted to meet or perform together but the performance will go on!  Band members have been busy practising at home and have individually recorded performances of The Highland Cathedral, recorded on individuals’ smart phones in their bedrooms,which will be digitally stitched together into a full band video performance by friend of the band, Gareth Hamer.

As it happens the last place Gareth went for a walk before ‘lockdown’ was onWotton Hill, and now with a bit of spare time he is able to help with this project. But the WottonHill connection doesn’t stop there. To show off the splendour of Wotton Hill on the planned video,Deputy Musical Director David Lawrence searched the internet for aerial views of the scenery and found some drone footage taken by Dale Curtis – Dale’s grandfather Maurice Brown was a long standing member of the band, being the conductor from 1919-1939 and being one of only two members of the band in the 1960s, who were determined to keep the band alive for generations today. The band owes a great debt indeed to Maurice.

David Lawrence said, “the fact that the band members have gone to these lengths to keep the connection with Band Sunday on Wotton Hill alive in this unusual year shows not just their commitment to music making but also their sense of pride in their home town and its community. I’m sure that Maurice would have been very proud.”

Cathedral on the Hill 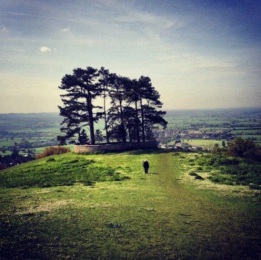 We hope you enjoyed our 2020 'virtual' performance on the hill!

The piece of Music is "Highland Cathedral' by Michael Korb & Ulrich Roever, arranged for brass Band by Howard Lorriman.

As you can see, the band members have all been busy practising at home and have individually recorded our performances on smart phones in our bedrooms.  These have all been stiched together into the full band video performance by friend of the band, Gareth Hamer.  I'm sure you will agree, Gareth has done an amazing job and the band is enormously grateful to him for all his hard work.

We should also say a big thank you to Dale Curtis, who has allowed us to use his drone footage as part of the video.  Coincidentally, Dale is connected to the band, as his grandfather, Maurice Brown, was the band's Musical Director from 1919 to 1939, and played a major part in keeping the band alive when membership dwindled in the late 1950s / early 1960s.  The band owes a great debt indeed to Maurice.

Last and by no means least, the band thanks our Deputy Musical Director, David Lawrence, who has coordinated this special project for us.  We thank him for all his hard work in setting up backing tracks and sending them out to us, and for his patience as we returned our finished articles without reading his (very clear) instructions properly, recorded the wrong way around, etc. (or perhaps that was just me!)